Thank you for your patience while we retrieve your images.

I've been going over some of my photos from my latest trip to Europe in Sep-Oct 2015. I was travelling across Europe with a girlfriend when the large numbers of refugees were escaping from Syria and just after the Budapest and Vienna train stations were closed as Europe was "considering" where they should put the Syrian refugees.... It was quite stressful and we actually changed our accommodation to larger hotels to make sure that we did not encounter any issues in case of any unexpected riots etc. Nothing happened of course, but safety was pretty important to us so we were making quite a few changes at the last minute.

So far I've selected these four photos to share only. These were taken either on Charles Bridge or in the surrounding streets in ‪#‎Prague‬. Most people take shots of the bridge, which incidentally was packed during the day, Except around the baggers. So I ended up photographing them. This is the first time I've taken photos of people begging on the street. Actually I have taken many of these throughout the trip as pretty much everywhere we travelled throughout Europe, with exception of Sopot in Poland, we saw people on the street, either homeless or in some other difficult situation. Whatever their circumstances it makes me incredibly sad.
Categories & Keywords
Category:
Subcategory:
Subcategory Detail:
Keywords:Prague
© Monika Mackowiak 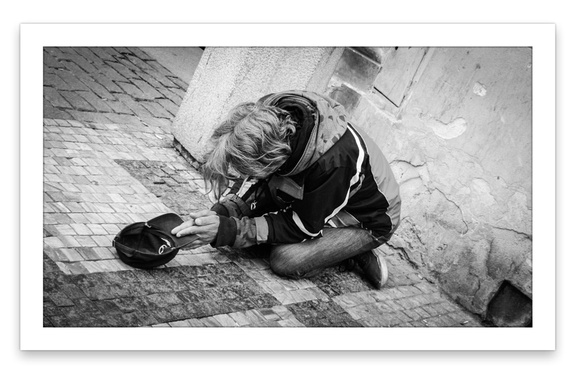